5 Reasons every sailor should try a Darwin Ambon

You are here:
The yacht blog 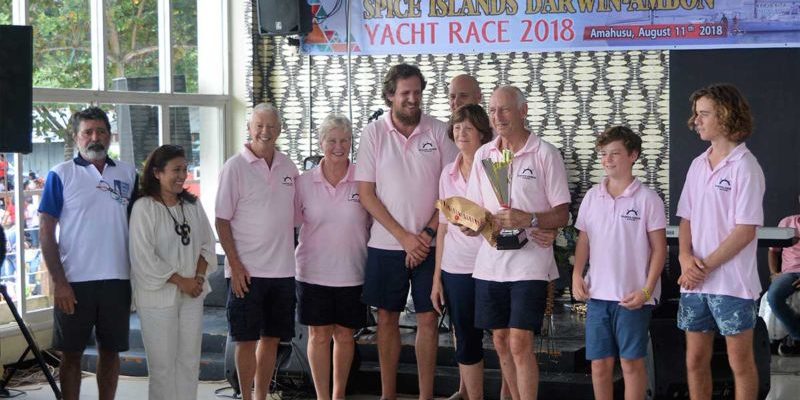 I’m writing this as I fly home from my first Spice Islands Darwin Ambon Yacht Race. From before we left Darwin to well after we arrived in Ambon the race has been an incredible experience, one that I think every sailor worth their salt should attempt at least once.

I must confess that before doing the race I knew very little about it. The boat I crewed on had done a couple of Darwin Ambon’s back in the early 1990s but none of our crew and no one else I know had ever competed in one before. If perhaps I’d known what I’m about to tell you, it would not have taken our crew quite so long to do the first one.

Maybe a Darwin Ambon is already on your radar or perhaps your just hearing about it for the first time, either way, I thought I’d share my top five reasons why every sailor should have a go … at least once.

OK, so I’m flying back to Melbourne where the weather forecast this morning was four degrees and I’m in thongs, shorts and a t-shirt. Doing a Darwin Ambon is a great excuse to escape the southern Australian winter and although you can still get some crazy weather during the race it still far more enjoyable than what most Sydney Hobart participants experience in the middle of the Australian summer (I’m speaking from experience here having competed in the 2004 Sydney Hobart when only half the fleet manage to reach the finish line).

The general wind direction for a Darwin Ambon is from the south or south east. We launched our spinnaker on the morning of day two and didn’t take it down for over 48 hours, and even then it was only so we could put up a different spinnaker. All in all we flew a kite for nearly four days, all the way from Melville Island just north of Darwin to within 10 miles of the finish line in Ambon harbour. All in all it was very conducive to games of cards in the cockpit during the day, drinking rum cocktails at sunset and getting a good night’s sleep each night.

Words cannot describe the warmth and sincerity of the welcome you will receive on arrival in Ambon. From the fireworks as you cross the finish line, to the reception at the Mayor’s house and the countless lunches and dinners in honour of the participants, you are treated like royalty. But even more compelling than the official functions and organised social events are the interactions with the locals of Amahusu Beach who cannot do enough to help you out while you’re there.

The first Darwin Ambon was run back in 1977 and it has been run nearly every year since. Over this time there have been incredible long term friendships that have developed between participants, organisers and the Ambonese people. At times being in Ambon felt like you’d been dropped into middle of a family reunion … except most family reunions involve far less Bintang and are nowhere near as much fun.

My reason for sailing in the Darwin Ambon was somewhat selfish. It was an opportunity to bring our old crew back together, have a bit of fun and experience a bit of healthy competition. I didn’t really think that my participating in the race would have such an impact on so many people. Whether it be through the visit to the local primary school, the games organised between the locals and the crews, the secondary school students hanging around the hotel just so they can practice their English on you or the injection of money into the local economy, you leave Ambon feeling like your presence there and the race itself makes a real difference to people’s lives.

When our crew got together last year and convinced our skipper to enter his boat Natusmi in one last race I thought that doing a Darwin Ambon would be a once off. But having experienced it first-hand I can fully appreciate why so many crews end up going back and back again. So although I stand by what I wrote earlier in that every sailor should have a go at a Darwin to Ambon at least once, you might just find that doing it just once is not nearly enough.

Natsumi : 1st Place in Cruising Monohull in the 2018 race

Photos from Simon via this ink https://photos.app.goo.gl/okehM3fFGxTGHoTu9